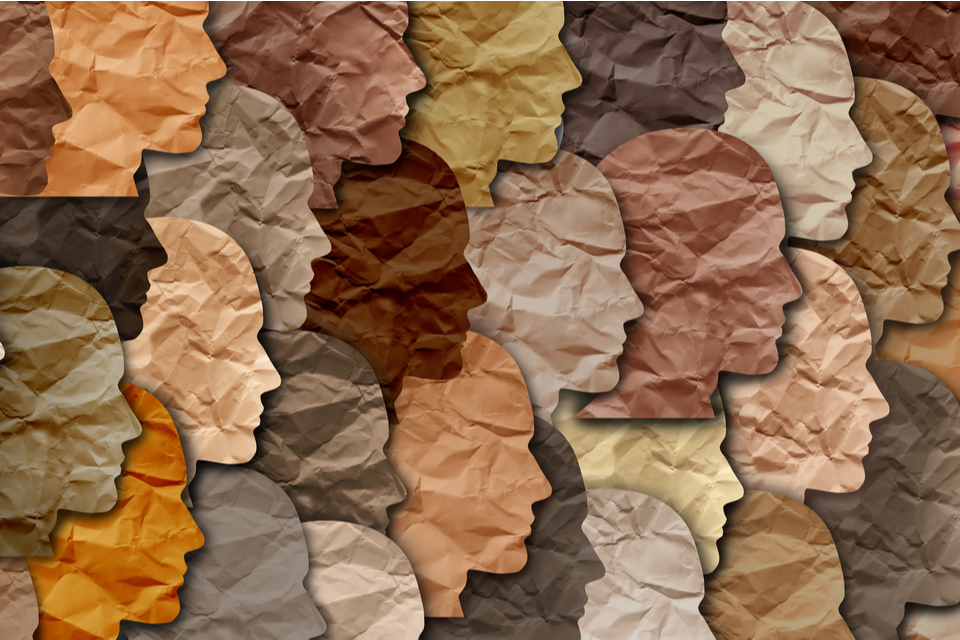 As a member of the Black, Asian and Minority Ethnic (BAME) Network Steering Group at HM Land Registry, I wondered when the first BAME colleague entered the workforce.

I asked our historian, Peter Mayer, who delved into the records, including the census, and came up with a candidate. As ethnicity or race was not recorded as part of the census, we had to do some more digging.

I’ll let Peter tell the story of what he found.

“The earliest staff members who would be classed as minority ethnic at HM Land Registry would most likely be Jewish. One possibility for the earliest is Israel Spielman, who was born in Soho, London in 1891, the son of coat maker Solomon Spielman. Solomon had been born in Russian Poland and had come to England before he married in 1878. There is a good chance he came to Britain because of the periodic persecution of the Jews in Czarist Russia.

“At the age of 16, Solomon’s son Israel joined the Post Office as a temporary clerk. At some point he transferred to HM Land Registry, as he was working here at the time of the census in 1911. In 1923 he was promoted to the clerical class.

“He joined the 15th battalion (Civil Service Rifles), London Regiment on 29 August 1914, just after the start of the war, becoming a Corporal in 1915 and Sergeant in 1917. His unit was shipped out to France in March 1915 and one month later he received a severe gunshot wound to his back while on the Western Front. This led to a year in Britain before he was posted back to the front. In March 1917 he required more hospital treatment at Seaford in Sussex.

“Israel is mentioned in the British Jewry Book of Honour for WW1. When he was discharged in 1919, he was suffering from bronchitis. Sadly, he died in 1923 aged only 31.”

I’m sure you will agree this is a fascinating glimpse into the life of one of the first BAME HM Land Registry employees but also points to the important role immigrants have played in British history, often unknown and unrecorded.

As you’d expect, we have a much more diverse workforce in HM Land Registry nowadays – just over 5% of our staff have declared they are from a BAME background as of August 2020. We want to increase that number so that we better represent the customers and society we serve. As our diversity promise says, we want to be “A great place to work, where difference is celebrated”.

HM Land Registry currently has 6 employee networks that our colleagues can join: Age; Lesbian, Gay, Bisexual, Transgender +; BAME; Disabled Employees; Faith and Belief; and the Women’s Network. We run workshops to encourage our colleagues to unlock their potential and training to enable progression, as well as mentoring opportunities.

When I started working at HM Land Registry in 1983, it was a world where diversity was not celebrated and you were expected to “fit in”. This has changed dramatically in recent years and staff members are now encouraged to be their true self.

Recognising a person’s identity is an important part of who they are, and HM Land Registry benefits from the diverse experiences that people bring to the organisation.

2020 is the Civil Service Year of Inclusion.

We welcome your comments about this blog in the comments below. Please note that we are unable to discuss individual cases through the comments section and would request that all such queries be directed to our contact web form where you will receive a response as soon as possible.

No comments made yet. Be the first to submit a comment

By accepting you will be accessing a service provided by a third-party external to https://www.wiggywam.co.uk/ Guide To Property Sourcing & Project Management
Experts Corner
Einstein once famously said, "The definition of insanity is to keep doing the same thing, over and over again, expecting a different result". Less infamous, yet still a quote by Einstein is; "The diff...
1087 hits
0 comments
Read More
19 November 2019

Create and manage 'power teams' on WiggyWam
Latest platform updates, features, tips, tricks and tutorials to help you get the most out of WiggyWam
WHAT IS A POWER TEAM? The term 'Power Team' has been around for a long time and is basically defined as "a group of professionals who work in non-competing, related fields, who have good working relat...
1172 hits
0 comments
Read More Guide To Property Sourcing & Project Management
Experts Corner
Einstein once famously said, "The definition of insanity is to keep doing the same thing, over and over again, expecting a different result". Less infamous, yet still a quote by Einstein is; "The diff...
1087 hits
0 comments
Read More Guide To Becoming The Best Agent In Your Area
Experts Corner
This guide has been compiled from years of experience in various sectors of the property industry, from estate and letting agency, surveying, property investing as well as training and mentoring many ...
905 hits
0 comments
Read More

Adding interactive virtual tours/3D models to property listings
Latest platform updates, features, tips, tricks and tutorials to help you get the most out of WiggyWam
There are a number of providers offering virtual tours/3D modelling but the one that stands out for us is Matterport. They have been around for a while now and just get better. Mat...
946 hits
2 comments
Read More

Key qualities modern consumers are looking for in estate agents - what are they?
How To Get Ahead in a Stamp Duty Fuelled Market – Secrets to a Successful Transaction
It is time for estate agents and lawyers to call a truce?
Are Agents or Conveyancers to Blame? Industry-Wide Survey Aims to Identify Why the Property Process Is Stuck in a Rut
Home Review concept launched by Surveyors to cut fall-throughs
77% of Homeowners Believe Estate Agents Have Failed to Improve - but Are They in a Position to Judge?
The Busiest Estate Agents Are Battling the Market Backlog in These Cities
45% Of Homeowners Were Put Off From Buying & Moving Again
Why your business should hire at least one unicorn employee!
Some results are in. And it's not pretty. Are you paying 10x what Rightmove charge other agents?
Benchmark Your Estate Agency With The Movers & Shakers Survey 2020
30 Ways To Promote Your Estate Agency
Guide To Property Sourcing & Project Management
Guide To Becoming The Best Agent In Your Area
Adding interactive virtual tours/3D models to property listings
Create and manage 'power teams' on WiggyWam
Property workspaces: collaborate throughout the sale of a property
Add Instagram Feeds To Your Wiggywam Profile